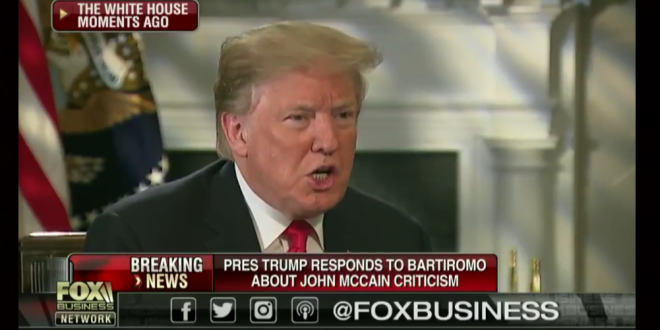 Trump Lies To Fox Host After She Calls Him Out Over Attacks On McCain: “He’s Dead, Why Do This?” [VIDEO]

President Donald Trump on Thursday falsely blamed the media for baiting him into attacking the late Sen. John McCain (R-AZ) before launching yet another attack at the senator, who’s been dead for seven months.

“I don’t talk about about it, people ask me the question, I didn’t bring this up,” Trump said in an interview with Fox Business Network’s Maria Bartiromo, a clip of which the network aired Thursday.

In fact, Trump first attacked McCain on Twitter over the weekend after court filings from an unsuccessful defamation suit filed against BuzzFeed News were released and showed McCain’s involvement in getting the so-called “Steele Dossier” to then-FBI Director James Comey — something that McCain acknowledged in life.

In an interview on Fox Business Network with Maria Bartiromo, Trump denied that his position on the Golan Heights had anything to do with the upcoming Israeli election.

“I wouldn’t even know about that,” Trump said. “I have no idea — I hear he’s doing okay, I don’t know if he’s doing great right now, but I hear he’s doing okay. But I would imagine the other side, whoever’s against him, is also in favor of what I just did. Every president has said, ‘Do that.’ I’m the one that gets it done.”

But the advantage for Israel’s embattled prime minister, who is facing a poplar former Army chief of staff, Benny Gantz, in the April 9 election, are unmistakable.

President Donald Trump‘s most recent attack on the late Sen. John McCain was so egregious that even Fox Business host Maria Bartiromo called him out during a new interview, pointing out that McCain “can’t punch back.” “He’s dead. Senator John McCain is dead. Why are you doing this?” she asked.

“It’s not a good portion of my time, it’s a very small portion,” Trump said, before repeating several of his favorite attacks about McCain, which themselves contain numerous falsehoods.

This Trump-Maria Bartiromo exchange on McCain is wild. He calls McCain “horrible.”

BARTIROMO: But Mr. President, he’s dead, he can’t punch back. I know you punch back–
TURMP: No.
BARTIROMO: –but he’s dead.
TRUMP: I don’t talk about it. People ask me the question. pic.twitter.com/bgdS3sD0el

Trump claims to Maria Bartiromo that he merely was answering questions about McCain. In fact, he inserted McCain in his tweetstorm on Sunday. No one had asked. pic.twitter.com/9s1oAMfIpm

“They gave [the Steele dossir] to John McCain, who gave it to the FBI for very evil purposes,” Trump replied. https://t.co/PGNlDtgk4J

In an interview with Maria Bartiromo set to air tomorrow, Donald Trump says John McCain gave the Steele dossier “to the FBI for very evil purposes, that’s not good.”

Told McCain is dead and can’t respond, Trump tells Bartiromo he’s reacting to Qs—and keeps attacking: “He was horrible what he did with repeal and replace. What he did to the Republican Party and to the nation and to sick people… So I’m not a fan of John McCain and that’s fine.

Previous SURVEY: As Many “Nones” As Catholics Or Evangelicals
Next Pirro’s Suspension By Fox To Continue This Weekend