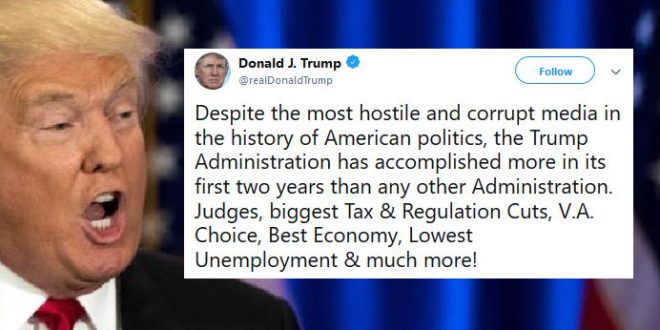 President Trump on Sunday blasted the media as the “most hostile and corrupt” in “the history of American politics.” The also president touted a number of his accomplishments in a tweet, saying that he has accomplished more than any other administration despite negative media coverage. His latest tweets come two days after the Labor Department reported that the U.S. economy added 20,000 jobs in February, far below the 180,000 estimate from analysts.

Despite the most hostile and corrupt media in the history of American politics, the Trump Administration has accomplished more in its first two years than any other Administration. Judges, biggest Tax & Regulation Cuts, V.A. Choice, Best Economy, Lowest Unemployment & much more!

“Donald Trump’s Approval Rating is at or near his highest level ever. The media is not being honest about what is happening in this Country.” Jesse Watters

Previous CHATTER AWAY: Overnight Open Thread
Next Ethiopian Airlines Crash Kills All 157 On Board [VIDEO]