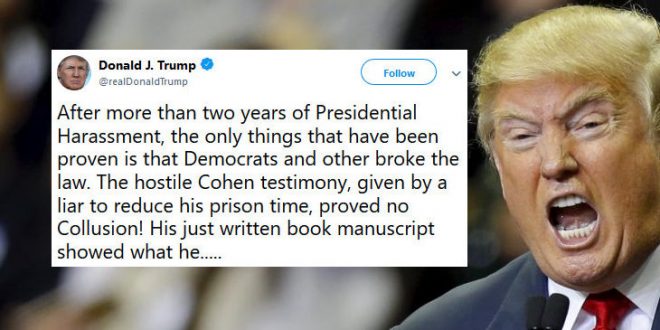 Fresh off a long day and successful speech at the Conservative Political Action Conference, the Commander-in-Tweet continued this morning with Cohen attacks begun last night. That’s no doubt prompted by the Sunday morning news shows, which have focused relentlessly on Cohen’s testimony last week before the House Oversight Committee.

After more than two years of Presidential Harassment, the only things that have been proven is that Democrats and other broke the law. The hostile Cohen testimony, given by a liar to reduce his prison time, proved no Collusion! His just written book manuscript showed what he…..

…said was a total lie, but Fake Media won’t show it. I am an innocent man being persecuted by some very bad, conflicted & corrupt people in a Witch Hunt that is illegal & should never have been allowed to start – And only because I won the Election! Despite this, great success!