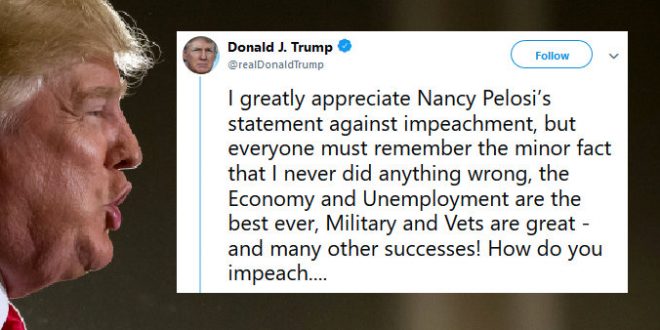 Trump: How Do You Impeach Someone As Great As Me?

President Trump said Wednesday that he appreciates Speaker Nancy Pelosi’s (D-Calif.) recent comments that set a high bar for launching impeachment proceedings against him, but added that he “did nothing wrong.”

Pelosi, who has tried for months to tamp down talk of impeachment, gave her strongest indication to date that she is unlikely to support such proceedings in an interview with The Washington Post published Monday.

Some Democrats also noted that Pelosi was not completely ruling out the possibility of such proceedings with her latest comments.

I greatly appreciate Nancy Pelosi’s statement against impeachment, but everyone must remember the minor fact that I never did anything wrong, the Economy and Unemployment are the best ever, Military and Vets are great – and many other successes! How do you impeach….

….a man who is considered by many to be the President with the most successful first two years in history, especially when he has done nothing wrong and impeachment is for “high crimes and misdemeanors”?