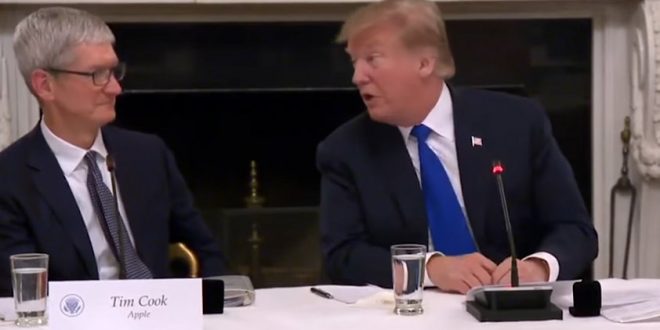 President Donald Trump reportedly denied he called Apple CEO Tim Cook, “Tim Apple.” Yet, here’s the rub. It is all on tape.

Trump told a group of Republican donors at Mar-a-Lago on Friday night he actually got Cook’s name right and it was the “fake news” who made it sound like he screwed up.

Trump told the donors that he actually said “Tim Cook Apple” really fast, and the “Cook” part of the sentence was soft. But all you heard from the “fake news,” he said, was “Tim Apple.”

And for the millionth time we see that Trump will lie about anything, no matter how minor, even when it’s on video. For his part, Cook himself made light of the gaffe by changing his Twitter profile name to Tim Apple.

UPDATE: Clearly Trump is watching the morning news and has come out with yet another version of the story.

At a recent round table meeting of business executives, & long after formally introducing Tim Cook of Apple, I quickly referred to Tim + Apple as Tim/Apple as an easy way to save time & words. The Fake News was disparagingly all over this, & it became yet another bad Trump story!