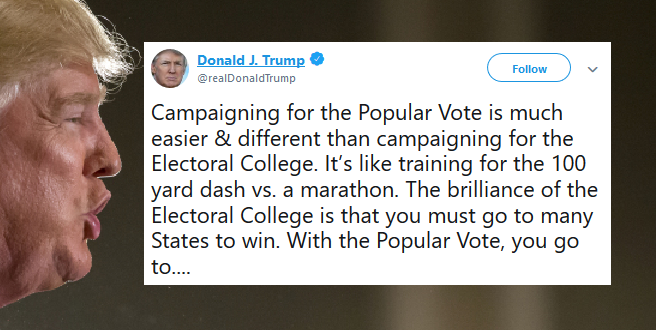 President Trump, who once called the electoral college “a disaster for a democracy,” defended it on Tuesday night as “far better for the U.S.A.” amid growing calls from Democratic presidential hopefuls to abolish it.

Trump’s comments on Twitter came in the wake of an endorsement by Sen. Elizabeth Warren (D-Mass.) of using the national popular vote to elect U.S. presidents rather than the electoral college — a position that has also been articulated by South Bend Mayor Pete Buttigieg and is under consideration by other 2020 Democratic candidates.

Five of the nation’s 45 presidents have taken office without winning the national popular vote. Prior to Trump, the most recent to prevail was George W. Bush, who defeated Al Gore in the electoral college in 2000.

….just the large States – the Cities would end up running the Country. Smaller States & the entire Midwest would end up losing all power – & we can’t let that happen. I used to like the idea of the Popular Vote, but now realize the Electoral College is far better for the U.S.A.

The electoral college is a disaster for a democracy.