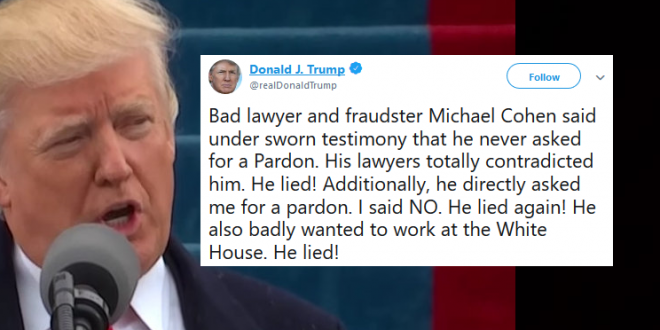 President Donald Trump on Friday claimed that his former personal lawyer and fixer Michael Cohen last year “directly asked me for a pardon.” Cohen’s legal adviser Lanny Davis had no immediate comment on the president’s allegation.

The White House had no immediate comment. Last week, Cohen testified at length under oath before the House Oversight and Government Reform Committee about Trump. “I have never asked for, nor would I accept, a pardon from President Trump,” Cohen told the committee.

Bad lawyer and fraudster Michael Cohen said under sworn testimony that he never asked for a Pardon. His lawyers totally contradicted him. He lied! Additionally, he directly asked me for a pardon. I said NO. He lied again! He also badly wanted to work at the White House. He lied!

This is the first time Trump said that he personally discussed a pardon with Michael Cohen. What else did they discuss during that conversation? https://t.co/5x3f4bbaKI

This morning Trump said Cohen lied about asking for a pardon. But he didn't go as far as to say he directly asked him for one. "His lawyers said that they went to my lawyers and asked for pardons," POTUS said. "And I can go a step above that, but I won't go do it now." https://t.co/wYCcjWgaT3

Just another set of lies by @POTUS @realdonaldtrump. Mr. President…let me remind you that today is #InternationalWomensDay. You may want use today to apologize for your own #lies and #DirtyDeeds to women like Karen McDougal and Stephanie Clifford.