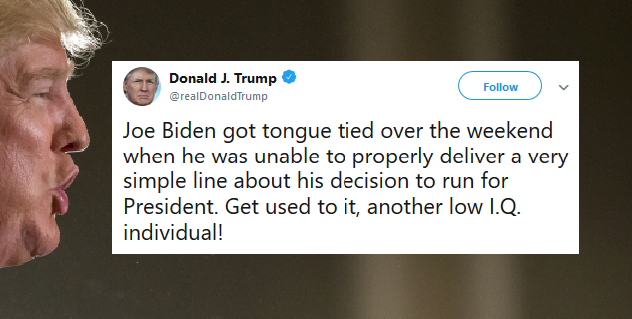 President Trump on Monday called Joe Biden a “low I.Q. individual” after the former vice president had a slip of the tongue and nearly announced he was running for president in 2020. The president was seizing on a mishap from Biden over the weekend where he told a gathering of Delaware Democrats that he has “the most progressive record of anybody running for the … anybody who would run” for the 2020 nomination.

Joe Biden got tongue tied over the weekend when he was unable to properly deliver a very simple line about his decision to run for President. Get used to it, another low I.Q. individual!

Trump thinks Biden is low IQ. Trump also wants to investigate Saturday Night Live after it ran a rerun he didn’t like.