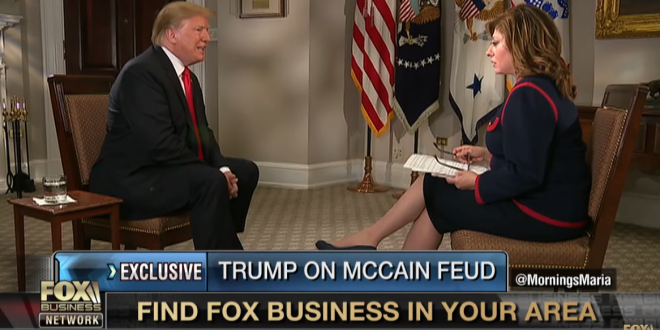 President Donald Trump grew angry during an interview with Fox Business anchor Maria Bartiromo on Friday as she repeatedly pressed him over his renewed attacks on John McCain.

When she noted that Trump doesn’t unite the country with how he talks about McCain, he claimed once again that his attacks only come up because of outside prompts, and then he called Bartiromo “fake news.”

“You shouldn’t have brought it up,” Trump said, visibly agitated. “Actually, I thought you weren’t supposed to bring it up, but that’s okay, fake news every once in a while.” Bartiromo pushed back: “It’s not fake news. You just told me why you have an issue with him.”

After the interviewed concluded, Bartiromo spoke to the camera, saying, “For the record, there were no conditions or stipulations agreed to ahead of the interview.”

Here’s Donald Trump indicating that Maria Bartiromo broke some sort of agreement not to mention his attacks on John McCain, then calling her “fake news.”

Anything less than complete fealty is punished.

He’s also lying, he started all this by angrily live-tweeting about McCain. pic.twitter.com/6S73OYMNcc

👀 Trump suggests Fox promised him they wouldn’t ask about McCain

“I thought you weren’t supposed to bring it up.” pic.twitter.com/9R3Z0K1O1b

Previous Trump: People “Will Not Stand For” Mueller’s Report
Next Franklin Graham Meets With Sanctioned Russian