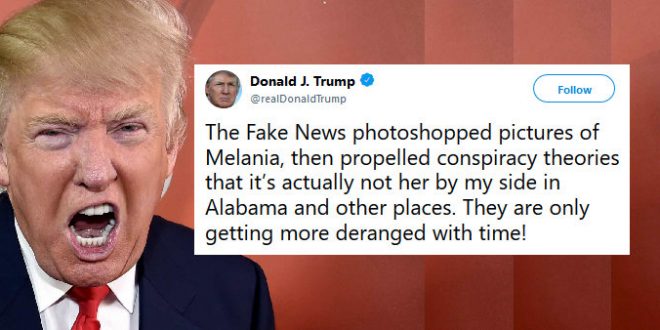 The White House is adamantly denying an internet conspiracy theory that a body double replaced first lady Melania Trump on her recent visit to Alabama. Stephanie Grisham, spokesperson for the first lady, responded to the theory in a tweet, singling out the talk show “The View” for discussing the supposed body double.

The View’s Ana Navarro and Joy Behar had discussed the matter the show Monday, seemingly laughing off the idea. Behar, however, later pointed to one photo and said “That one does not look like (Mrs. Trump), sorry. I wasn’t going to go along with this, but that one in that picture does not look like her. It’s a different shaped face.”

And now Glorious Leader is pissed too, but is claiming that the “fake news” is somehow behind the memes.

.@flotus & @potus traveled to Alabama to pay their respects & comfort victims of the tornado devastation. In typical fashion, @theview chooses to laugh in the face of tragedy. Shameful. https://t.co/KzG2c4Th4a

The Fake News photoshopped pictures of Melania, then propelled conspiracy theories that it’s actually not her by my side in Alabama and other places. They are only getting more deranged with time!

The recasting of Melania is the worst I’ve seen since they recast Aunt Viv in Fresh Prince #fakemelania pic.twitter.com/HDIMi7FDAh

Trump if he ever comments on #FakeMelania: “I have the best body doubles. My body doubles are very strong. I’m the BEST husband. So best that I have two Melanias.”

And no, I don’t buy the conspiracy. But I’m definitely here for it.