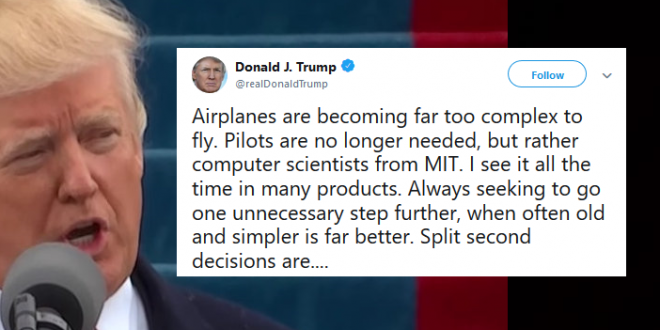 Trump: “Airplanes Are Becoming Far Too Complex To Fly And I Don’t Want Albert Einstein To Be My Pilot”

The British aviation regulator on Tuesday grounded Boeing 737 MAX planes, joining a growing list of countries and airlines from China to Mexico suspending the planes’s operations after the second deadly crash of the popular aircraft in less than five months.

After the UK issued its statement about the planes, President Donald Trump on Tuesday tweeted: “Airplanes are becoming far too complex to fly. Pilots are no longer needed, but rather computer scientists from MIT.”

Minutes before the below tweets, from Bloomberg:

There’s no technical trigger for a grounding order. Instead, it’s a judgment call by the department in question, complicated by the fact that the FAA currently doesn’t have a permanent administrator.

U.S. Secretary of Transportation Elaine Chao, who’s responsible for the agency and whose views would probably be decisive, seems to be taking a wait-and-see approach.

Boeing’s Chief Executive Officer Dennis Muilenburg, meanwhile, has worked hard to be close to President Donald Trump, who could decide the issue one way or another with a single tweet.

Airplanes are becoming far too complex to fly. Pilots are no longer needed, but rather computer scientists from MIT. I see it all the time in many products. Always seeking to go one unnecessary step further, when often old and simpler is far better. Split second decisions are….

….needed, and the complexity creates danger. All of this for great cost yet very little gain. I don’t know about you, but I don’t want Albert Einstein to be my pilot. I want great flying professionals that are allowed to easily and quickly take control of a plane!

Previous Carlson: Iraqis Are “Semi-Literate Primitive Monkeys”
Next Former VP Joe Biden Tells Raucous DC Crowd To Save Their Energy Because “I May Need It In A Few Weeks”