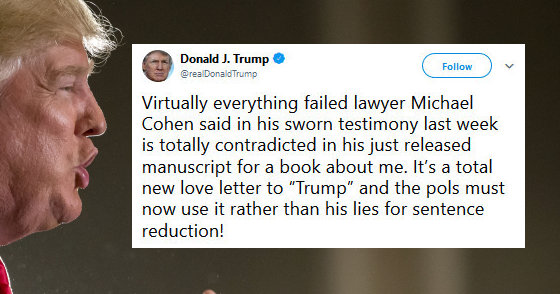 On Saturday night, President Donald Trump insisted on Twitter that a manuscript by Michael Cohen was “just released.” He also suggested that the same manuscript would show Cohen’s “testimony was a total lie.”

Yet, here’s the rub. It seems the manuscript that Trump wants politicians and pundits to believe over Cohen’s testimony may not even exist and certainly was not just released.

Virtually everything failed lawyer Michael Cohen said in his sworn testimony last week is totally contradicted in his just released manuscript for a book about me. It’s a total new love letter to “Trump” and the pols must now use it rather than his lies for sentence reduction!

The brand new manuscript for a new book by failed lawyer Michael Cohen shows his testimony was a total lie! Pundits should only use it.

Media reports quoting publishers say @MichaelCohen212 did shop a book proposal but, so far, none have confirmed any manuscript was submitted — or even completed. https://t.co/Gp5JgWpUee