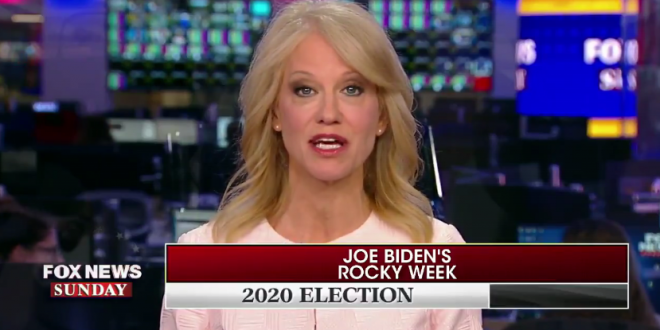 Conway’s remarks come two days after former Nevada assemblywoman Lucy Flores wrote about a campaign-trial experience with Biden, saying the potential Democratic 2020 front runner smelled her hair and kissed the back of her head.

Former vice president and unofficial Democratic presidential candidate Joe Biden issued a statement Sunday responding to allegations by former Nevada State Assemblywoman Lucy Flores that he inappropriately touched and kissed her while she ran for lieutenant governor in 2014.

“I may not recall these moments the same way, and I may be surprised at what I hear. But we have arrived at an important time when women feel they can and should relate their experiences, and men should pay attention. And I will,” Biden’s statement said.

.@KellyannePolls on @JoeBiden: If anybody just types in “Creepy Uncle Joe Videos” you come up with a treasure trove…I think Joe Biden has a big problem here because he calls it affection and handshakes, his party calls it completely inappropriate. pic.twitter.com/MKbbw2mUIC

Statement from @JoeBiden this morning. pic.twitter.com/EbCchX2npU

“I have no reason not to believe Lucy,” Bernie Sanders says on CBS of Lucy Flores allegation against Biden. “And I think what this speaks to is the need to fundamentally change the culture of our country.” Sanders adds: “I’m not sure that one incident alone disqualifies anybody.”

Bernie Sanders, who traded endorsements with Lucy Flores in 2016, said he has “no reason’ to doubt her Biden storyhttps://t.co/6YouaLOvEO pic.twitter.com/bpgFrjwQJG

“I read the op-ed last night. I believe Lucy Flores and Joe Biden needs to give an answer.”

Asked if he should run, Warren: “That’s for Joe Biden to decide.”