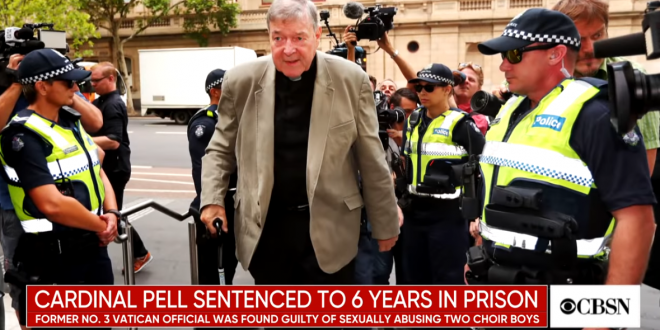 The most senior Catholic cleric ever to be convicted of child sex abuse was sentenced to six years in prison in Australia on Wednesday morning.

Cardinal George Pell, 77, faced as many as 50 years in prison after being convicted in December for the molestation of two choir boys while he was the archbishop of Melbourne in the 1990s. Pell must serve a minimum of three years and eight months before he is eligible for parole. He will spend the rest of his life as a registered sex offender.

Pell was convicted for the assault of the 13-year-old boys after he caught them swigging sacramental wine in a rear room of Melbourne’s St. Patrick’s Cathedral in late 1996. The jury also found Pell guilty of indecently assaulting one of the boys in a corridor more than a month later.

Previous CHATTER AWAY: Overnight Open Thread
Next Trump: How Do You Impeach Someone As Great As Me?