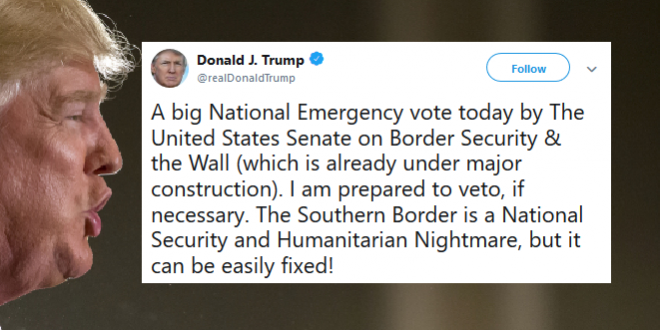 The GOP-controlled Senate is poised to pass a Democratic resolution Thursday blocking President Trump’s declaration of a national emergency to build a wall on the Mexican border.

Talks within the GOP conference to avoid an embarrassing rebuke for Trump collapsed Wednesday, and Sen. Mike Lee (Utah) joined four fellow Republican senators who have already said they will back the measure.

The House has already approved the resolution, meaning Trump will be forced to use his veto power for the first time. Republicans control 53 seats in the chamber, and Democrats are set to back the resolution unanimously. A GOP aide said the high-water mark for votes against Trump is likely 12 Republicans and 59 senators overall.

A big National Emergency vote today by The United States Senate on Border Security & the Wall (which is already under major construction). I am prepared to veto, if necessary. The Southern Border is a National Security and Humanitarian Nightmare, but it can be easily fixed!

Previous Fox Host: Vanity Fair Points Out That Beto Has A Huge Library As If It’s A Plus That He Reads Books [VIDEO]
Next George Conway Calls Trump A “Pathological Liar” And Calls For “Serious Inquiry” Into His Mental Condition