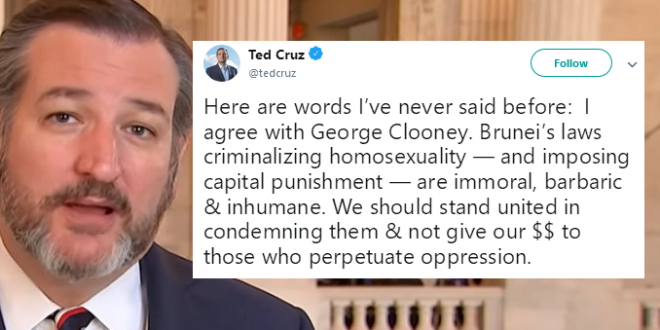 Sen. Ted Cruz is making common cause with actor George Clooney, known for his liberal brand of politics, in calling for an economic boycott of Brunei after the Southeast Asian country approved a measure that would make gay sex and adultery punishable by stoning.

In an op-ed published on Deadline Friday, the actor condemned the Bruneian government for approving the measure. The new policy, which is set to be fully implemented nationwide on April 3, will allow law enforcement officials to stone and whip individuals to death who are convicted of engaging in gay sex or committing adultery.

As most of you surely recall, in the fall of 2015, then-presidential candidate Ted Cruz attended a “religious liberty” conference at which Pastor Kevin Swanson called for executing homosexuals shortly before interviewing Cruz on the same stage.

Cruz had been warned about Swanson’s track record by CNN’s Jake Tapper before the event and after three weeks of ignoring questions from the media, a spokesman for Cruz finally told the Rachel Maddow show that Swanson’s calls for genocide were “not explicit” and therefore unworthy of a response.

Later, in April 2016, Cruz claimed that he had publicly denounced Swanson’s comments when they happened, which was, of course, a lie. Nevertheless, last night’s statement is welcome.

Here are words I’ve never said before: I agree with George Clooney. Brunei’s laws criminalizing homosexuality — and imposing capital punishment — are immoral, barbaric & inhumane. We should stand united in condemning them & not give our $$ to those who perpetuate oppression. https://t.co/eipC9MiQOk

Previous US Declines To Condemn Brunei On LGBT Death Penalty
Next Fox Host: Immigration May Kill Millions Of Americans