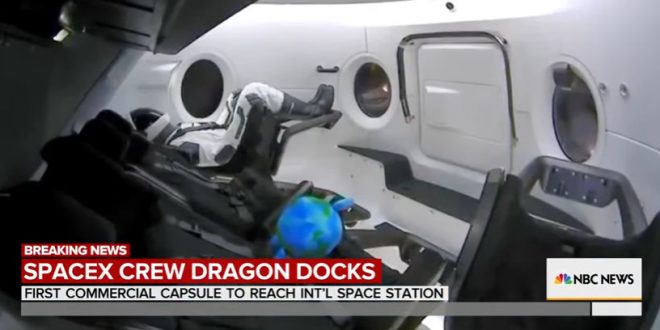 A sleek American-built capsule with just a test dummy aboard docked smoothly with the International Space Station on Sunday in a big step toward putting the U.S. back in the business of launching astronauts.

The white Dragon capsule, developed by Elon Musk’s SpaceX company under contract to NASA, closed in on the orbiting station nearly 260 miles above the Pacific Ocean and, flying autonomously, linked up on its own, without the help of the robotic arm normally used to guide spacecraft into position.

Dragon is the first American-made spacecraft capable of carrying a crew to pull up to the space station in eight years. If this six-day test flight goes well, SpaceX could launch two NASA astronauts to the orbiting outpost this summer.

Previous Schiff: We Already Have Direct Evidence Of Collusion
Next Neverland Ranch Back On Market At 70% Discount