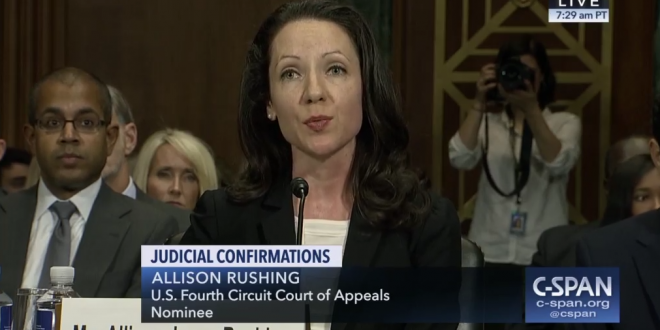 The Senate voted Tuesday to confirm Allison Jones Rushing, 37, to the U.S. Court of Appeals for the 4th Circuit, making her the youngest federal judge in the country. The Senate voted 53-44 to put Rushing into the lifetime court seat. Every Republican present voted for her. Every Democrat present opposed her.

Democrats raised a number of concerns with Rushing, who is a partner at the D.C.-based law firm Williams & Connolly. She worked for Alliance Defending Freedom, a conservative Christian organization that has been classified as a hate group by the Southern Poverty Law Center.

She has argued that there were “moral and practical” reasons for banning same-sex marriage. And some lawmakers said she simply lacks the experience or legal ability to be a federal judge.

Today, Senate Republicans confirmed one of the most anti-LGBTQ nominees in history. LGBTQ people are right to be concerned that Allison Rushing will be unable to provide fair and impartial judgment to all those that come before her given her previous employment at the Alliance Defending Freedom, which has advocated for re-criminalizing homosexuality and has even defended state-sanctioned sterilization of transgender people abroad.

By continuing to promote people like Allison Rushing, who hold dangerous and out-of-touch views about the LGBTQ community, this administration clearly demonstrates that their goal of decriminalizing homosexuality across the world is just empty rhetoric. Every Republican Senator must be held accountable for this dangerous appointment to the Fourth Circuit. Democrats stood united against Rushing’s appointment, and we will continue to speak out against hate.

Previous POLL: Majority Of Voters Believe Trump Is A Criminal
Next Trump Mocks Hillary For Not Running Against Him