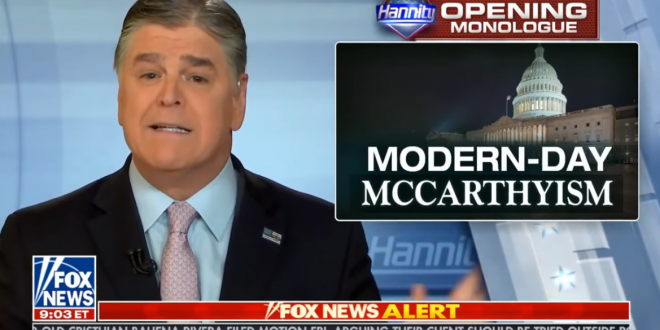 “We the people will now be subject to what will be the biggest, most gruesome display of modern-day McCarthyism, which is just the widest fishing expedition, all in an effort to destroy the president and anybody who supports him. Because the bottom line is all they care about is getting their power back so they can institute socialism right here in this country. Instead of just admitting the truth that they’ve been lying to you, they announced the launch of the broadest and most sweeping witch hunt into simultaneously basically every aspect of the president’s life: his businesses, his finance, and every single thing he has done as a candidate and as president.

“All designed to create a false narrative about who this president is. They’ll never talk about the success, they played no part in it. Now it’s on full display. The whole strategy is about battering, harassing, making insinuations about the president and his allies under heavy legal cost and nothing to do with seeking truth. They’re just hoping that something, anything — they’re going to throw everything up against the wall and hope something, someplace, somewhere sticks. They’ll throw out every wild conspiracy theory possible.” – Sean Hannity, on last night’s show.

“We the people will now be subjected to the biggest display of modern day McCarthyism….which is the widest fishing net expedition….every aspect of the presidents life….all in order to get power back so they can institute Socialism.” @seanhannity