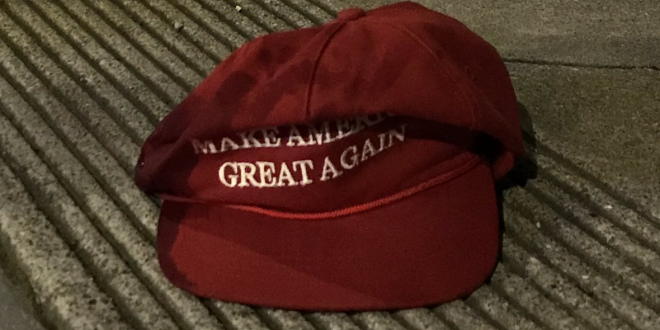 A sword-wielding assailant wearing a red “Make America Great Again” hat slashed a man in the hand during an altercation outside a popular roller-skating rink in San Francisco’s Western Addition on Friday, officials said. Police are searching for the attacker, who fled the scene outside the Church of 8 Wheels on Fillmore and Fell streets, leaving his victim bleeding profusely on the sidewalk outside the crowded skating spot.

The victim tried to grab the hat, a symbol of President Trump’s 2016 presidential campaign, and the other man whipped out a sword and slashed him, Officer Robert Rueca, a San Francisco police spokesman said. Police originally reported that the victim was wearing the hat, but changed their statement late Saturday. Scott Sweeney, 24, said he saw a man wearing the recognizable hat with a sword tucked into the back of his jacket about 30 minutes before the attack. The man, Sweeney said, was shouting homophobic slurs at him.

As Sweeney was about to enter the Church of 8 Wheels, he said the suspect approached the building and brandished his sword. Sweeney and his group continued inside the roller rink, while the man stayed outside, he said. Minutes later at 9:50 p.m., police responded to the rink for a report of a stabbing.

@SFPD is looking for a #maga hat wearing suspect who attacked a man with a sword outside a roller rink. Our full story at 11 on @nbcbayarea – streaming on https://t.co/3w0gJl7DlU pic.twitter.com/6FShOllYN7

Tonight, a #MAGA chud targeted a queer friendly roller skating event in San Francisco. We had seen him earlier as we were going in, he called us faggots. He followed us up to the event with a sword, we made it in okay, but he attacked someone outside. Fuck white supremacy. pic.twitter.com/uOJWHHkDkB