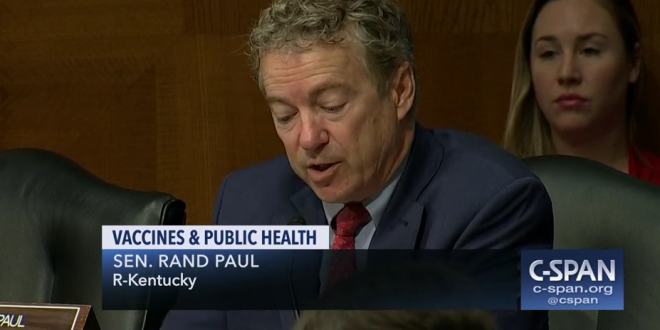 Anti-vaccination activists, some with their (presumably unvaccinated) children, packed the Dirksen Senate Office Building Tuesday morning for a hearing that they hoped would vindicate, or at least recognize as legitimate, their fear that protecting their families from measles runs the risk of something worse, including autism and other disorders.

As the doors closed on the room where the Senate Committee on Health, Education, Labor and Pensions was meeting, a woman could be heard pleading to be allowed in to give her side of what has become a heated, and potentially dangerous, controversy.

That hope would be quickly dashed. The committee’s chairman, Sen. Lamar Alexander, R-Tenn., recalled the polio epidemic of his youth, before the invention of a vaccine for the disease, which can cause permanent paralysis and respiratory failure. “I had classmates who lived in iron lungs,” he said. “Vaccines save lives.”

Virtually all the speakers endorsed the safety and importance of vaccines. But Sen. Rand Paul (R-Ky) struck a defiant note. Even though he said he and his children had been vaccinated because the benefits greatly outweigh the risks, he asked whether it was appropriate for the government to require people to be vaccinated against certain diseases.

“I do not favor giving up on liberty for a false sense of security,” he said, prompting applause from the anti-vaccine activists in the hearing room. The Senate hearing comes as the resurgence of measles across the United States is spurring a backlash against vaccine critics.

“As we contemplate forcing parents to choose this or that vaccine, I think it’s important to remember that force is not consistent with the American story, nor is force consistent with the liberty our forefathers sought when they came to America,” said Paul, reading off a paper.

Paul didn’t just make the case that vaccines should be voluntary, however. He used his platform at the hearing to affirmatively push the perception that they are potentially problematic. “It is wrong to say that there are no risks to vaccines,” said Paul. “Even the government admits that children are sometimes injured by vaccines.”

Here’s @RandPaul arguing against mandatory vaccines during a congressional hearing today: “I still don’t favor giving up on liberty for a false sense of security.” pic.twitter.com/qUjfwdJ6Hl

NEW — Sen. Rand Paul used his perch on the Senate Health committee today to push the notion that it’s fine for parents not to vaccinate their kids and that vaccines cause harmhttps://t.co/DopLUiDR7I