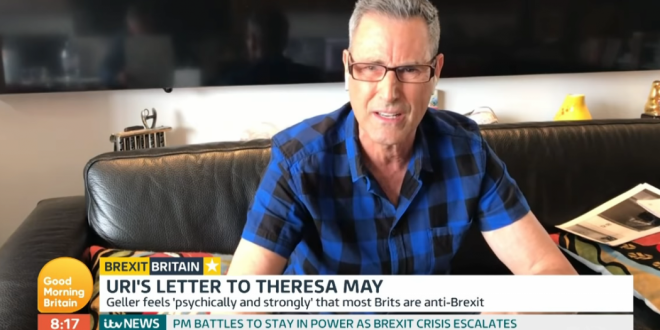 The illusionist Uri Geller has called on the British people to help him in his efforts to telepathically stop Brexit by sending their own telepathic messages to Theresa May’s mind, compelling her to revoke article 50.

He plans to transmit his psychic energy into May’s brain at the “very mystical time” of 11.11 in the morning and evening every day from a secret location near his home in Israel.

Uri Geller has vowed to use his telepathic powers to stop #Brexit.

Here’s how he plans to do it… pic.twitter.com/Pyo1r9DfXm

Previous Conway: Adam Schiff Must Resign For “Peddling Lies”
Next GERMANY: Owners Of Global Conglomerate To Donate Millions After Revelations Of Nazi Slave Labor Past