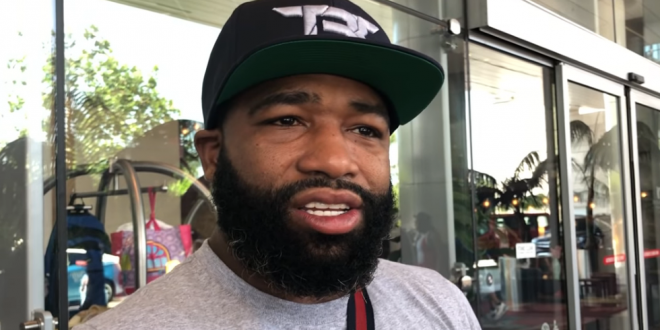 Looks like boxer Adrien Broner’s masculinity is so fragile that he had to go on a caveman-esque, homophobic disturbing rant that he titled a “PSA” to gay men who might be interested in him.

“If any fag, punk ass nigga come run up on me, trying to touch me on all that gay shit, I’m letting you know right now—if I ain’t got my gun on me, I’m knocking you the fuck out,” the boxer said in a video posted to his social media account.

Oh and Broner wasn’t finished…he also threatened to shoot gay men who would find the boxer attractive. “If I got my gun on me, I’m shooting you in the fucking face, and that’s on God and nem. I’m not playing with none of these niggas. I don’t like gay shit.”

According to TMZ and Yahoo Sports, this is part of an explosive online exchange between Broner and “ex-gay” social media personality Andrew C. Caldwell of St. Louis, who made a name for himself by claiming “I’m not gay no more, I am delivert!” Viral video of his “conversion” has more than 1.2 million views on YouTube.

Their feud has been escalating since Caldwell, who has 96K followers on Instagram, sent Broner a direct message. Broner threatened him for sliding into his DMs: ”[Andrew C. Caldwell] if you don’t get out my inbox before I punch the testosterone out yo GAY ASS,” Broner wrote to Caldwell.

Last year Caldwell claimed that he’s still ex-gay and told BET, “Now I get hard for women. I don’t get hard for men. There ain’t nothing wrong with a flirtation but I’m still delivered.” His statement was reported verbatim by the Christian Post.

In 2017 former NFL quarterback Kordell Stewart sued Caldwell for $4.5 million over Caldwell’s claims that they had an affair.

Caldwell today tells TMZ that he is meeting with lawyers over possible legal action against the boxer.