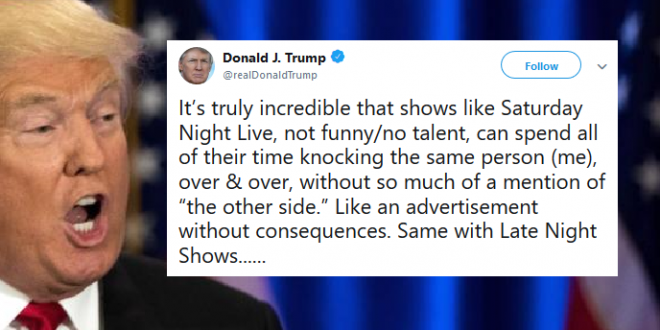 President Trump on Sunday knocked “Saturday Night Live” for its repeated jokes at his expense the morning after the sketch comedy show aired a rerun featuring a skit depicting life if he had never become president.

The president also wondered if the Federal Election Commission or the Federal Communications Commission should look into the matter, suggesting there “must be Collusion with the Democrats and, of course, Russia!

The president levied a similar criticism at the time the live version aired, suggesting the show was an example of “collusion” and “should be tested in courts.” Trump last week complained twice about late night comedy shows after the subject was discussed on “Fox & Friends.”

It’s truly incredible that shows like Saturday Night Live, not funny/no talent, can spend all of their time knocking the same person (me), over & over, without so much of a mention of “the other side.” Like an advertisement without consequences. Same with Late Night Shows……

….Should Federal Election Commission and/or FCC look into this? There must be Collusion with the Democrats and, of course, Russia! Such one sided media coverage, most of it Fake News. Hard to believe I won and am winning. Approval Rating 52%, 93% with Republicans. Sorry! #MAGA