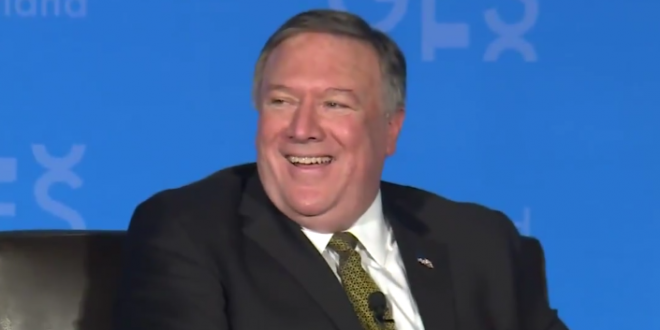 Pompeo: I’m Here Until Trump Tweets Me Out Of Office

Secretary of State Mike Pompeo quipped on Monday that he intends to stay in his role until President Trump “tweets” him out of a job. Pompeo was asked at a speaking engagement in Kansas how he liked being secretary of State and how long he planned to stay on the job.

“I’m going to be there until he tweets me out of office,” Pompeo said with a chuckle, eliciting laughs from others in the room. “Which I’m not counting on, at least today,” he added.

Asked how long he plans to be in his role, Secretary of State Mike Pompeo tells a crowd in Kansas, “I’m going to be there until he tweets me out of office.” https://t.co/4xmpLtAGK2 pic.twitter.com/tx0B5VF74e