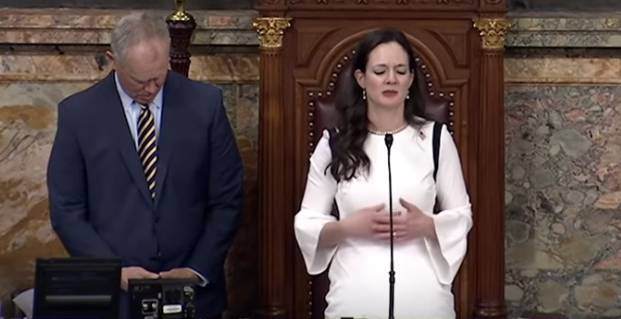 A freshman Republican’s opening prayer Monday in the Pennsylvania House of Representatives drew complaints that it was inappropriately divisive. Rep. Stephanie Borowicz began the day’s session with a Christian invocation that thanked Jesus for the honor and President Donald Trump for standing “behind Israel unequivocally.”

“At the name of Jesus every knee will bow and every tongue will confess, Jesus, that you are Lord,” said Borowicz, elected in November to represent a Clinton County district.

Borowicz’s remarks occurred shortly before the swearing-in of Rep. Movita Johnson-Harrell, D-Philadelphia, the first woman Muslim to serve in the chamber. Democratic Leader Frank Dermody of Allegheny County called Borowicz’s invocation “beneath the dignity of this House” and asked that a group be set up to review the procedure.

More from her prayer:

God, forgive us. Jesus, we’ve lost sight of you. We’ve forgotten you, God, in our country. And we’re asking you to forgive us, Jesus, that Your promise and Your words says that if My people who are called by My name will humble themselves and pray and seek Your face and turn from their wicked ways, that You’ll heal our land. Jesus, You are our only hope.

As you’ll see below, Borowicz appears to sob portions of her prayer, which surely gets her extra White Jesus points.