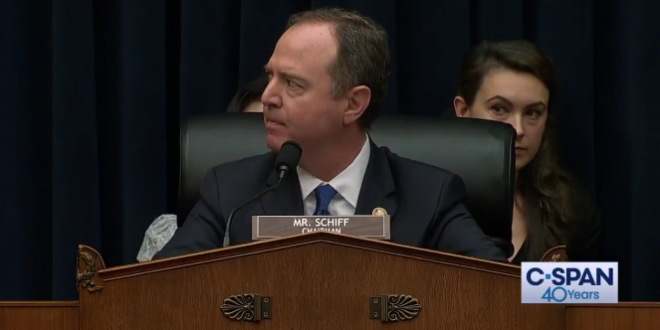 The House Intelligence Committee devolved into bitter infighting Thursday, as all nine Republicans demanded Chairman Adam Schiff resign his post and the California Democrat responded with a blistering account of “evidence of collusion” between President Donald Trump’s campaign and Russia.

“We have no faith in your ability to discharge your duties,” said Rep. Mike Conaway (R-Texas), who led the House’s Russia probe last year.

Conaway said Schiff’s insistence that there was ample evidence of collusion were “incompatible with your duties as the chairman of this committee.” And he said the findings in special counsel Robert Mueller’s report — which haven’t yet been viewed by any members of Congress — “conclusively refute” Schiff’s allegations.

Republicans in Congress have stopped short of calling for Schiff to lose his congressional seat. But the campaign to unseat him as chairman began Monday, as the president’s top advisers and congressional Republicans, including House Minority Leader Kevin McCarthy (R-Calif.), called on him to resign.

NEW: “I’m so proud of the work of Chairman Adam Schiff,” Speaker Pelosi says after GOP members of House Intel Committee call for his resignation.

“I think they’re just scaredy-cats. They just don’t know what to do.” https://t.co/t2NWMxwLme pic.twitter.com/ID59B7QtUf

PELOSI w a FIERY defense of Schiff: “They’re afraid of the truth…They just don’t know what to do. So they had to make an attack. It’s their own insecurity, their own fear of the truth & their fear of a patriotic, effective leader.”

“You might say that’s just what you need to do to win, but I don’t think it’s okay….I do not think that conduct, criminal or not, is okay and the day we do think that’s okay is the day that we will look back and say ’that is the day America lost its way’” @RepAdamSchiff pic.twitter.com/qcdijQbiO0

Adam Schiff is one of only four Democrats who the White House cannot deny access to any classified information.

Chairman Schiff just slammed Republicans hard. To their faces. Schiff stared them down, and listed off all the indisputable evidence that the Trump campaign colluded with Russia. Watch it, then watch it again. 🇺🇸 pic.twitter.com/Dk54ntGV15

Adam Schiff goes off, lists the Trump Tower meeting, sharing of polling data, call to hack Clinton, Kushner back channel, and more: “You might say that’s all OK … I think it’s unpatriotic. And yes, I think it’s corrupt and evidence of collusion.” pic.twitter.com/ak4XxM6cvF

Previous House Votes To Rebuke Trump On Trans Military Ban
Next Junior May Run For Office: I Definitely Enjoy The Fight