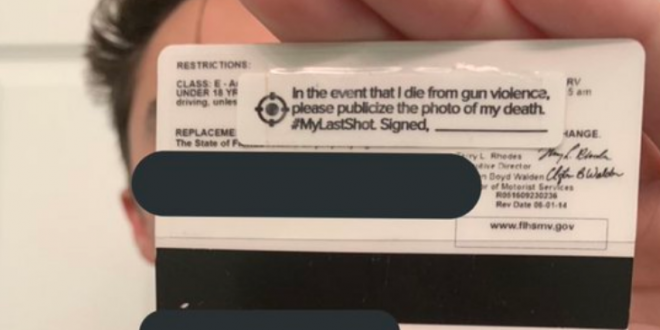 David Hogg, an activist who survived the Parkland, Fla., school shooting, requested on Friday that a photo of his death be publicized if he is ever a victim of gun violence.

Hogg took to Twitter to share a photo of a sticker placed on the back of his ID card, part of a gun violence prevention project requesting that such photos be publicized in the event of one’s death.

“In the event that I die from gun violence, please publicize the photo of my death,” the sticker reads. Hogg’s sister, Lauren Hogg, also placed the sticker on her current high school ID card.

Gun control reform activists and survivors of the school shooting in Parkland, Florida have reacted with outrage after it was reported an official with the National Rifle Association pushed false theories about the massacre to a popular online conspiracy theorist.

Mark Richardson, who works as an instructor program coordinator for the gun rights group, reportedly exchanged emails after the shooting with Infowars reporter and conspiracy theorist Wolfgang Halbig, who is known for providing outlandish theories about the child victims of the Sandy Hook Elementary School massacre.

The #MyLastShot campaign was launched this week by current students at Colorado’s Columbine High School, the site of a 1999 mass shooting in which 13 students and teachers were murdered.

In the event that I die from gun violence, please publicize the photo of my death #MyLastShot pic.twitter.com/Cx0l4lY0aX

In the event that I die from gun violence, please publicize the photo of my death. #MyLastShot pic.twitter.com/1j0372rvZA

When it comes to gun violence ignorance isn’t bliss. So whatever you do, don’t look away.” #MyLastShot #EndGunViolence pic.twitter.com/7SQJXn0A9r

I’m participating in the @_MyLastShot campaign because I don’t want to become another forgotten statistic.

If statistics won’t make you realize the severity of this public health crisis, maybe the graphic photo of my body will.#MyLastShot pic.twitter.com/fghMsflmfB

David is giving #MyLastShot a platform that it didn’t have. We appreciate his support and the media attention it has garnered not for him, but for this project and for ending gun violence.