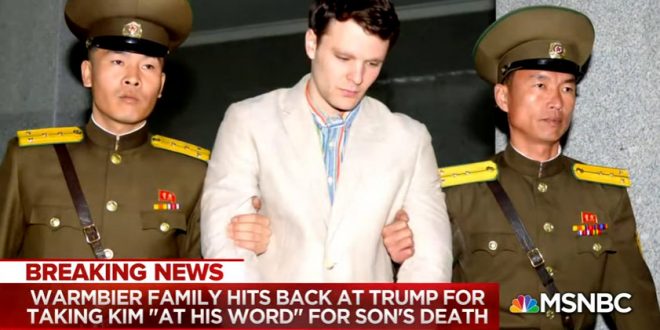 The parents of Otto Warmbier issued a blistering statement on Friday saying Kim Jong Un and his government “are responsible for unimaginable cruelty and inhumanity” after President Donald Trump asserted that the North Korean dictator had been unaware of the harrowing treatment the student endured while detained there.

Otto Warmbier, then a 21-year-old student at the University of Virginia, was arrested in January 2016 during a five-day trip to North Korea for allegedly trying to steal a propaganda poster from his Pyongyang hotel.

He was sentenced to 15 years of hard labor. After 17 months in prison, Otto was released in June 2017 in a vegetative state and flown back to the United States where he died less than a week later with a severe neurological injury.

US student Otto Warmbier’s parents rebuke Trump after he sided with Kim Jong Un’s claim about their son’s captivity. “Kim and his evil regime are responsible for the death of our son Otto,” Fred and Cindy Warmbier say in a statement. https://t.co/QJSm474AU1 pic.twitter.com/68aJ4uwQYV

Trump: “Kim Jong Un is a lovely man. He had nothing to do with the death of Otto Warmbier.”

Shame on you President Trump.

Previous Candace Owens At CPAC: Conservatives Must Take Over Culture Like We Did During The Renaissance [VIDEO]
Next Trump Junior Mingles With Proud Boys At CPAC Party