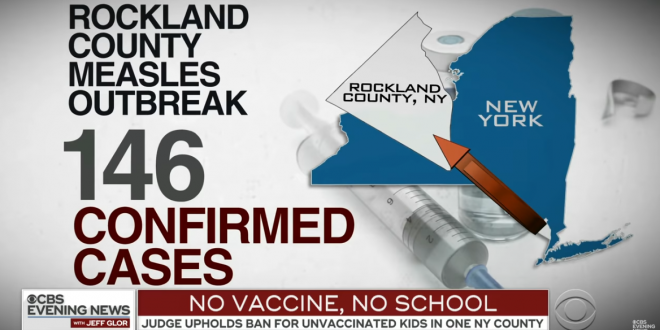 A federal judge today denied issuing a temporary injunction that would have allowed 44 unvaccinated children to go back to class at the Green Meadow Waldorf School, citing Rockland County’s “unprecedented measles outbreak.”

“The plaintiffs have not demonstrated that public interest weighs in favor of granting an injunction,” U.S. District Court Judge Vincent Briccetti said in federal court in White Plains. After the ruling, many parents in the court room embraced.

“Preventing my child from being with his class, his teacher, his classroom, has had a significant social and psychological impact,” said a parent of a 4-year old preschooler who declined to give her name. “He is confused, given his young age, about why he isn’t allowed on his campus,” she said, her voice wavering.

The decision added to a growing public pushback against people who do not vaccinate their children. Last week, an Ohio teenager who got vaccinated against his family’s wishes gave dramatic testimony before Congress of how he believed his mother had fallen prey to widely debunked conspiracy theories about the dangers of immunization.

Days later, New York lawmakers proposed a bill that would allow teenagers to get vaccinated without parental consent. On Monday, local chapters of the American Academy of Pediatrics expressed their support for the legislation.