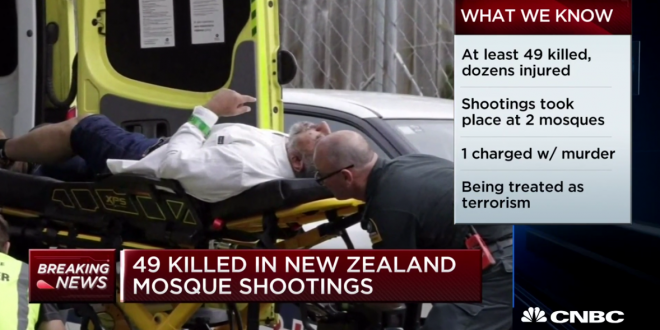 Forty-nine people have been shot dead and 48 injured in attacks at two mosques during Friday prayers in Christchurch, the worst mass shooting in New Zealand’s history. The prime minister, Jacinda Ardern, said this was “one of New Zealand’s darkest days” as police uncovered explosive devices attached to cars and commissioner Mike Bush urged all mosques across the country to close their doors for the time being.

One explosive had been safely detonated and another was in the process of being dismantled, Bush said, but the situation was still “evolving” with a real possibility of further offenders being explored. New Zealand’s entire police arsenal and personnel were deployed throughout the country and en masse in Christchurch, the South Island’s largest city, which is known to have an active white-supremacist subculture.

A 17-minute video posted to social media appears to show part of the attack. The clip, which may have been taken from a helmet camera worn by a gunman, begins behind the wheel of a car. A man, whose face can occasionally be seen in the rearview mirror, drives through the streets of Christchurch before pulling up in front of Al Noor Mosque, beside the sprawling Hagley Park. He approaches the mosque on foot, his weapon visible, and begins shooting at people at the entrance.

What follows is a harrowing nearly two minutes of his firing on worshipers. At one point the gunman exits the mosque and fires in both directions down the sidewalk before returning to his car for another gun — which, like the others, was inscribed with numbers, symbols or messages. When he re-enters the mosque, he shoots several bodies at close range. “There wasn’t even time to aim, there was so many targets,” he says at one point, as the sirens of an emergency response vehicle blare in the background.

Shortly before the shooting, someone appearing to be the gunman publicly posted links to a manifesto on Twitter and 8chan, an online forum. The 8chan post included a link to what appeared to be the gunman’s Facebook page, where he said he would soon broadcast live video of the attack.

The New Zealand police said on Twitter they were “aware there is extremely distressing footage relating to the incident in Christchurch circulating online,” and urged people not to share the link. “We are working to have any footage removed,” the police said.

In his manifesto, he identified himself as a 28-year-old man born in Australia. He listed his white nationalist heroes, described what he said motivated him to attack, and said he purposely used guns to stir discord in the United States around the Second Amendment.

A white supremacist shooter filmed himself gunning down dozens of worshippers at a mosque in New Zealand while streaming the massacre online. The gunman, who called himself Brenton Tarrant on Twitter, entered the Al Noor Mosque in Christchurch about 130pm on Friday during afternoon prayers and opened fire.

Tarrant’s rampage began when he got into his car wearing military-style body armour and a helmet with a series of rifles on the passenger seat. The weapons, including a semi-automatic shotgun he used, are scrawled with the names of past mass killers and cities where the shootings occurred.

After adjusting items of clothing, he says: ‘Remember lads, subscribe to PewDiePie’ and drives off with a sat nav giving him instructions on how to reach the mosque.

A terrorist & mass murderer inflicted an atrocity on a horrific scale on the people of Christchurch, firing automatic weapons in two mosques while live-streaming every moment. 40 people are believed to be dead, another 48 injured. One gunman, an Australian, is among 4 in custody. pic.twitter.com/Xau8OanKyK

NZ terrorist claims to have been inspired by Candace Owens of Turning Point. She’s naturally distancing herself from it. But consider this – if a Muslim jihadist cited an Islamic organisation and cleric in a massacre then that organisation would rightly come under media scrutiny.

FACT: I’ve never created any content espousing my views on the 2nd Amendment or Islam.

The Left pretending I inspired a mosque massacre in…New Zealand because I believe black America can do it without government hand outs is the reachiest reach of all reaches!! LOL! https://t.co/4vM1aXleL4

If the media attempts this “Candace inspired a mosque shooting in New Zealand” bit—they better all lawyer the f*ck up.
I will go full Covington Catholic lawsuit.

#BREAKING: In manifesto, Christchurch, New Zealand mosque shooting suspect said he supported U.S. President Donald Trump “as a symbol of renewed white identity and common purpose,” but not as a policymaker. pic.twitter.com/RHW2SwzjXs

Just heard news of the devastating reports from New Zealand Christchurch.
I feel absolutely sickened having my name uttered by this person.
My heart and thoughts go out to the victims, families and everyone affected by this tragedy.