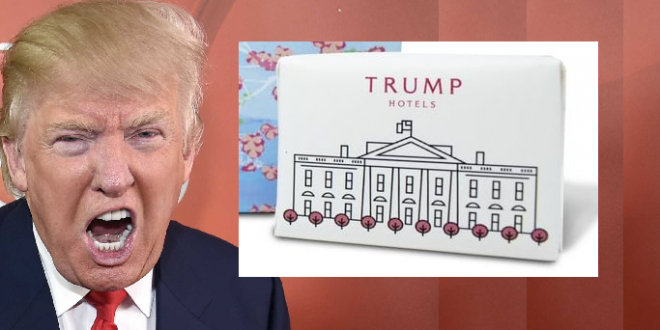 President Donald Trump has emblazoned the “Trump” brand name on images of the White House to sell in his Trump Store and at the Trump International Hotel in the capital. The products give the bizarre impression that the White House is a Trump hotel.

Walter Shaub, who was director of the Office of Government Ethics in both the Obama and Trump administrations, sharply criticized the products as the latest move to “monetize the presidency” for private gain.

The Trump Organization, which houses President Donald Trump’s businesses and is currently being sued, investigated, or subpoenaed by—lord!—so many folks, has plenty of merch. Several collections, in fact. On Wednesday it released a new one, called “Spring with Trump Hotel Washington, D.C.,” and would you believe it? It’s doing florals and potential conflicts-of-interest for spring.

The collection includes everything from a soap set to a jumbo mug to a long-sleeve T-shirt, ranging in price from $16 to $45, before shipping and tax. These items are adorned with cherry blossoms, and some have images of the White House. These are typical D.C. symbols and plenty of D.C. merch bears the president’s residence. But the president doesn’t usually profit from selling items with his home on it.

Other items in the new line slap the Trump Hotels logo above images of the Lincoln Memorial and US Capitol.

Our corrupt President’s hotel, in which he retains a conflicting financial interest, is selling products with the image of the White House on it. I’d say he’s monetizing the presidency again, but it’s a continuous effort so “again” wouldn’t make sense. https://t.co/BgBfaQKNy2