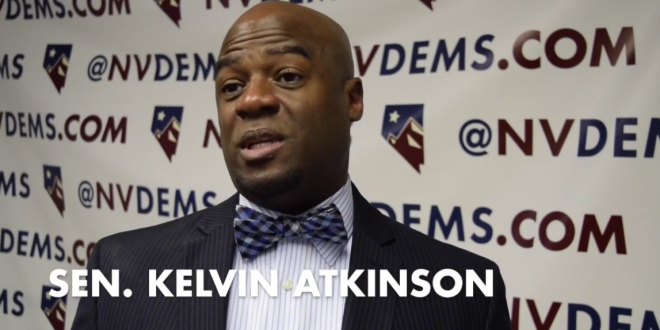 Democratic Senate Majority Leader Kelvin Atkinson is expected to resign from the Legislature on Tuesday after pleading guilty to federal charges of misappropriation of hundreds of thousands of dollars in campaign funds for personal use.

The sudden resignation marks a precipitous fall for Atkinson, the state’s third African-American and first openly gay Senate majority leader. A legislative mainstay, Atkinson was first elected to the Assembly in 2002 and joined the Senate after the 2012 election.

He is expected to be replaced by his assistant, Nicole Cannizzaro, who will become the first female majority leader of the upper house in Nevada history.

“I am extremely disappointed in the news that Kelvin Atkinson misappropriated campaign funds for his personal use. This admitted violation of the law goes against the integrity every elected officer in the state of Nevada should uphold. By doing so, he betrayed the trust of the public, and therefore should be held accountable,” said Governor Steve Sisolak.

“The Nevada Senate Democrats are saddened and disappointed to learn of the circumstances leading to Senator Atkinson’s resignation today,” Senate Democrats’ Executive Director Cheryl Bruce said. “The charges levied against him are serious, and allege conduct that we strongly condemn. We trust the courts to do justice in this matter.”

Atkinson first came out publicly during a 2013 Senate debate on repealing Nevada’s ban on same-sex marriage. He and his husband were the first same-sex couple to marry in Nevada the following year.