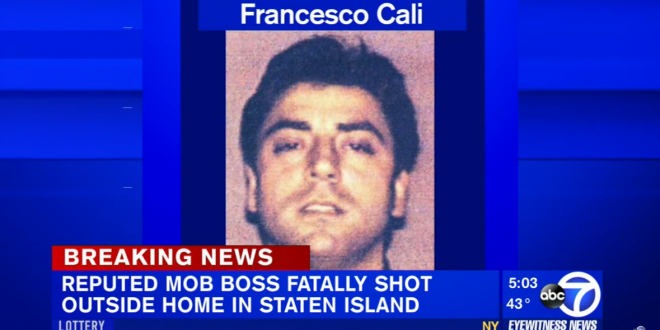 It was Rudy Giuliani’s prosecution of the Gambinos and other mob families that led to his election as New York City mayor. Today’s news is a big flashback to those days.

Cali, 53, was shot six times in the chest by a gunman in a blue pickup truck on Hilltop Terrace near Four Corners Road in Todt Hill about 9:15 p.m. Medics took him to Staten Island University Hospital, where he died.

A panicked family member called 911, telling a dispatcher Cali was run over before he was shot, though investigators were still looking into whether the gunman mowed the mobster down, sources said. Police were searching for the pickup truck that raced from the grisly scene, sources said.

A law enforcement official briefed on the investigation told ABC News that detectives are attempting to determine if Cali’s killing signaled the revival of a “mob war.” The shooting outside Cali’s home, the source said, suggests the killing was meant to send an ominous message. He is the first reputed mob boss murdered in New York City in 30 years.

Last October, Sylvester Zottola, 71, reportedly of the Bonanno crime family, was gunned down at a McDonald’s drive-thru in the Bronx. Zottola’s son, Salvatore, survived an apparent assassination attempt in July outside his home, also in the Bronx.