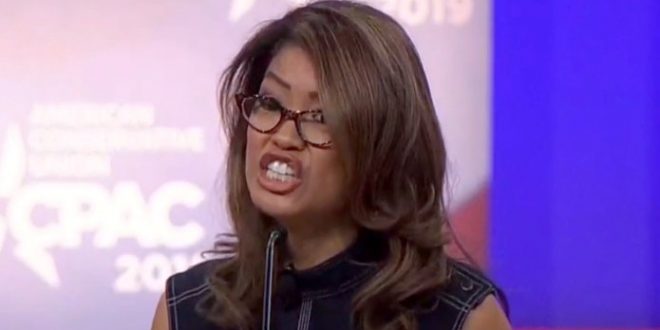 “Our enemies are both foreign and domestic. Inside our already flimsily defended borders, we are not at peace. Or rather, the radical left is not at peace with us. From the comfort of TV green rooms and Beltway backrooms and corporate boardrooms and conference ballrooms, it may not look like civil war is imminent, but threats and outright violence against you—ordinary, law-abiding people—are now regularized features, not just random bugs, in these Disunited States.”

“College students are being punched. Elderly citizens are being harassed. MAGA hat-wearers are being kicked off planes and assaulted in school hallways and restaurants. Conservative speakers are being mobbed and Molotov-cocktailed. ICE agents and their families are being targeted. Pro-lifers are being kicked and menaced. Pro-Trump anti-jihad moms on social media are being doxed. The madness is beyond parody.” – Michelle Malkin.

Michele Malkin closed out her #CPAC2019 speech by declaring that “diversity is not our strength.”

because sometimes this stuff is so nutty people don’t believe me… pic.twitter.com/JoDkiKNUk2