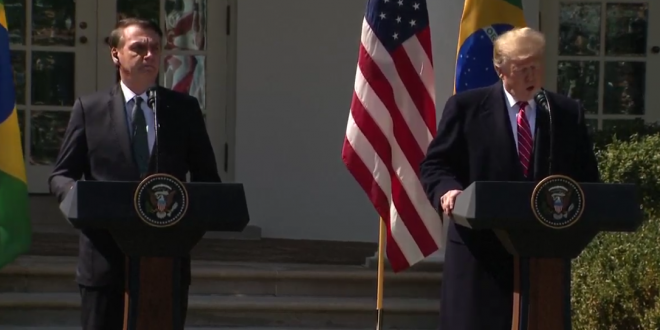 President Donald Trump and “the Trump of the Tropics,” Brazilian president Jair Bolsonaro, will meet face to face at the White House on Tuesday. Bolsonaro — a nationalist, Twitter-loving, “fake-news” decrying politician — chose to make the first bilateral trip of his presidency to Washington, where he has found an important friend and ally in Trump.

As part of a three-day visit in Washington, Bolsonaro will have a private meeting and press conference with Trump at the White House aimed at strengthening economic ties and positioning Brazil as an allied front in the Western Hemisphere.

The convergence of the two leaders has for good reason been hotly anticipated: Trump and Bolsonaro represent the hemisphere’s two largest democracies and both style themselves as radical disrupters of the status quo. On the campaign trail, the once-fringe Bolsonaro espoused a far-right platform that promised an end to corruption, a tough crackdown on crime and a sweeping repudiation of the political left.

He waxed nostalgic for military dictatorship, raged against the mainstream media, and won the adoring support of evangelical voters. Despite their different biographies and homelands, it was impossible not to hear the tinny echoes of Trumpism in Bolsonaro’s rise — indeed, some of the Brazilian leader’s own family members actively courted the comparison.

Brazilian president Jair Bolsonaro tweeted on Sunday a video falsely accusing a journalist of conspiring to impeach him — the latest in a string of conspiratorial, explicit, or otherwise unnerving posts, which seem to follow the example established by US President Donald Trump.

Bolsonaro was inaugurated in January, and has repeatedly pushed the boundaries of convention with the unconfirmed — and often demonstrably untrue — information he shares on official social media accounts.

He sent Brazilian Twitter into a tailspin last week when he posted sexually explicit images of a man at a São Paulo carnival urinating on another man’s head.