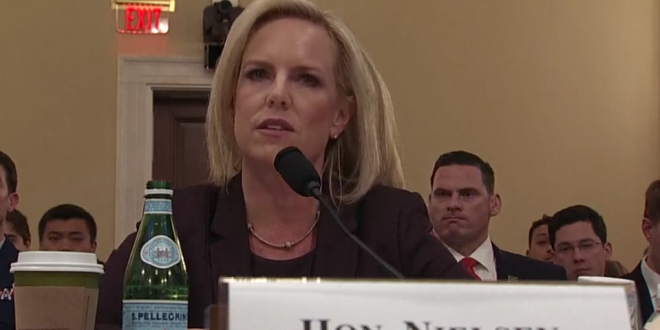 Kirstjen Nielsen, the homeland security secretary, on Wednesday implored Congress to confront what she called a “humanitarian catastrophe” on the southern border by supporting President Trump’s call for a border wall and changing laws to crack down on asylum-seekers and illegal border-crossers.

In her first congressional appearance since Democrats took control of the House, Ms. Nielsen was defiant in the face of criticism of the administration for its treatment of migrant families at the border, especially its decision last summer to separate children from their parents.

Although some members of the committee will likely delve into other immigration-related issues, two congressional aides told CBS News the hearing will largely focus on border security and Nielsen’s oversight of the administration’s stringent immigration enforcement efforts.

The hearing has just started.

Previous White Supremacist Incidents Up 182% Since 2017
Next PHOTOS: At The LGBTQ Task Force’s 2019 Winter Party