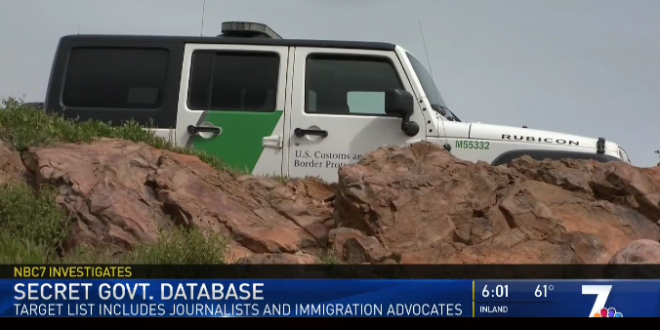 Documents obtained by NBC 7 Investigates show the U.S. government created a secret database of activists, journalists, and social media influencers tied to the migrant caravan and in some cases, placed alerts on their passports.

As the migrant caravan reached the San Ysidro Port of Entry in south San Diego County, so did journalists, attorneys, and advocates who were there to work and witness the events unfolding.

But in the months that followed, journalists who covered the caravan, as well as those who offered assistance to caravan members, said they felt they had become targets of intense inspections and scrutiny by border officials.

Those documents indicate the International Liaison Unit (ILU), an organization that coordinates the sharing of intelligence between Mexico and the US, compiled information on 10 journalists — seven of them US citizens — a US attorney, and a large group of international immigration activists.

Those people were then subjected to secondary screenings during which they were separated from sensitive documents and photographs, interrogated, and in at least one case even prevented from entering Mexico for unspecified reasons.

The documents detailing the operation were leaked to NBC 7 by an unnamed Homeland Security source, who told the station, “We are a criminal investigation agency, we’re not an intelligence agency. … This is an abuse of the Border Search Authority.”