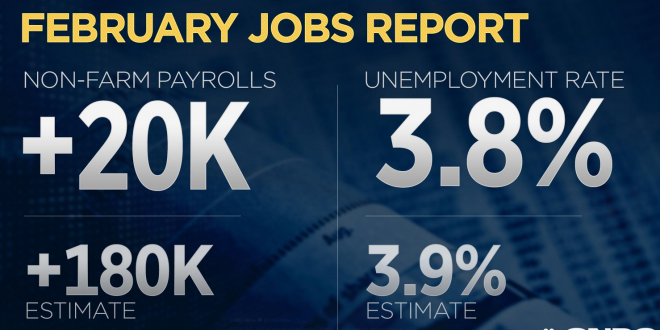 The U.S. economy added a sharply lower-than-expected 20,000 non-farm payrolls in February, the Bureau of Labor Statistics reported Friday. Consensus expectations called for 180,000 positions to be added for the month, according to Bloomberg data. February’s headline reading for new payrolls was the weakest in 17 months.

The unemployment rate fell to 3.8%, from 4% in January. Consensus economists expected the rate to have ticked down to 3.9%. The labor force participation rate remained unchanged in February at 63.2%. Average hourly earnings in February increased to 0.4% month-over-month and 3.4% year-over-year.

Breaking News: The U.S. economy added just 20,000 jobs in February, a sharp slowdown in hiring after what had been a much more robust streak https://t.co/B2rR2SGMsX

The U.S. only added 20,000 jobs in February. Here’s what you need to know about the latest jobs report https://t.co/9GP66rttbA pic.twitter.com/cMF5lkUuk4