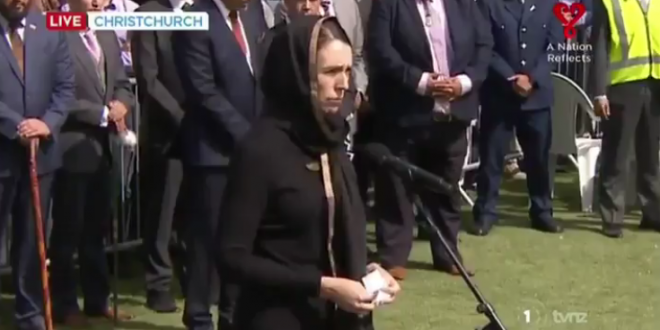 One week on from the Christchurch mosque attacks, many New Zealanders showed their support for Muslim communities by wearing headscarves during the country’s national day of reflection Friday.

Headscarf for Harmony organizers said their initiative was a “very simple gesture of support for our Muslim communities grieving the loss of 50 amazing mothers, fathers, children, friends and colleagues in the terrorist attack last Friday.”

The event is the brainchild of Auckland GP Dr Thaya Ashman who thought of the idea after seeing a Muslim woman on the news saying she was now too afraid to go outside because she wears a hijab.

Before going ahead with the idea, she spoke to a close Muslim friend before approaching the Islamic Women’s Council of New Zealand and the Muslim Association of New Zealand. Both organisations had given their full support and had been humbled by the offer.

She also asked for advice for Kiwis around how to wear their headscarf or if there were more favourable colours to choose but the organisations had chosen not to advise due to the numerous intricacies involved in wearing one and people unnecessarily getting bogged down in too much detail.

New Zealanders observed the Muslim call to prayer Friday in reflecting on the moment one week ago when 50 worshippers at two Christchurch mosques were slain — an act that an imam told the crowd of thousands had left the country broken-hearted but not broken.

In a day without precedent, people across New Zealand listened to the call to prayer on live broadcasts while thousands, including Prime Minister Jacinda Ardern, gathered in leafy Hagley Park opposite the Al Noor mosque, where 42 people died. “New Zealand mourns with you. We are one,” Ardern said.

Dear New Zealanders Aotearoa – Being a Muslim, I’m overwhelmed. I have never seen this kind of solidarity in my entire life – The vigils, The Haka performances, The scarves. It’s just amazing and heartwarming.

A #policewoman wearing a #headscarf is seen as people attend the burial ceremony of a victim of the mosque attacks, at the Memorial Park Cemetery in #Christchurch , #NewZealand March 21, 2019. REUTERS/Jorge Silva #NewZealandShooting pic.twitter.com/VUCDPXtlDE

“He was hoping to divide us, and instead, he’s brought us all together in one big hug”: New Zealand women of all faiths put on headscarves to show solidarity with Muslim community in wake of mosque shooting massacre. https://t.co/YBjNSA5ogj pic.twitter.com/tHvGS3778a