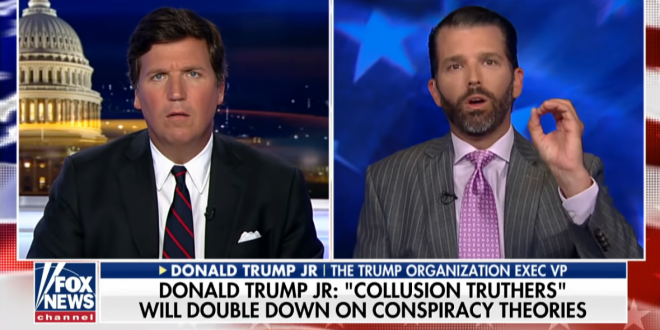 Junior Demands FBI Probe Into Top Democrats Because “It Was Them Colluding” With Russia, Not Us [VIDEO]

“This was the greatest farce ever perpetrated on our democracy. It’s a disgrace and it’s a stain on our Constitution,” Donald Trump Jr. said on “Tucker Carlson Tonight.” He called for the FBI investigators and those behind the anti-Trump dossier to be investigated themselves.

“Certainly when you look at what the other side was doing, you realize that it was them, in fact, colluding, not us,” Trump Jr. said.

Previous TEXAS: Republicans Advance Bill To Allow Doctors And Many Others To Discriminate Against LGBT Citizens
Next Avenatti Out On Bail, Vows To Expose Nike [VIDEO]