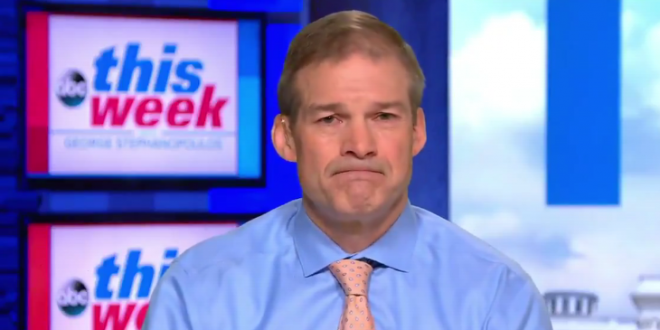 Host George Stephanopoulos cited evidence that 14 associates of Trump had more than 100 contacts with Russian nationals and asked if that concerned Jordan, who didn’t respond to the question directly.

“Well, look, the central charge of the special counsel was to see if there was conspiracy, coordination or collision. That was the focus of the entire investigation,” he responded. “We have not seen any of that.”

“So, just to be clear, the president’s involvement in those hush money payments doesn’t concern you?,” Stephanopoulos asked. “The president has had an amazing two years,” Jordan responded without answering, instead opining that Cohen’s testimony wasn’t reliable.

This is how an autocracy works. The leader commits crimes and the mandarins and jesters don’t care. https://t.co/8as5BJQrwy

Reporter: “Congressman Jordan, how can you continue to turn a blind eye to the criminal behavior in the White House?”

The Democrats don’t think the Mueller Report will be the bombshell they hoped it would be.

Cong @Jim_Jordan has letter to editor in today’s @washingtonpost decrying @RepCummings as “advancing partisan interests”. Even if even slightly true, I’m beyond tired of hypocrisy of reps like Jordan, who is poster-child for partisanship. pic.twitter.com/td6cpBXtNY

This nation owes Devin Nunes, Mark Meadows, and Jim Jordan an enormous debt of gratitude for refusing to give up on the Spygate scandal. Lesser men would’ve caved already.