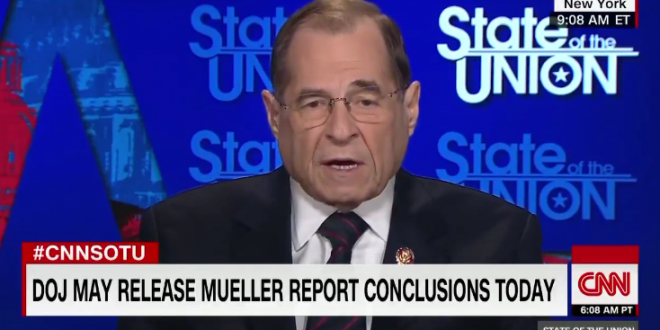 Jerry Nadler: We’ll Issue Subpoenas To Get Full Mueller Report And Take It To SCOTUS If We Have To [VIDEO]

House Judiciary Chairman Jerry Nadler (D-N.Y.) said Sunday that his committee will seek the full report from special counsel Robert Mueller’s Russia investigation within the next few months and is willing to take the demand to the Supreme Court.

“It’s so crucial that the entire report and the evidence underlying it be released to the public,” Nadler told CNN’s Dana Bash on “State of the Nation.”

He said his committee would “try to negotiate and try everything else first but if we have to, yes, we will certainly issue subpoenas to get that information.” He added that he would “absolutely” be willing to take a fight over the report to the Supreme Court level if necessary.

House Judiciary Chairman @RepJerryNadler says that Congress “absolutely” will take the demands to get the full Mueller report to the Supreme Court if necessary, adding he would issue a subpoena and would not wait months to begin the fight. #CNNSOTU https://t.co/nXNJoUoEox pic.twitter.com/qqBOAxufUa

House Judiciary Chairman @JerryNadler: “The special prosecutor is limited in scope, his job was limited in scope and limited to crimes. What Congress has to do is look at a broader picture. We have the responsibility of protecting the rule of law” #CNNSOTU https://t.co/nXNJoUoEox pic.twitter.com/7OyJ0idX6l