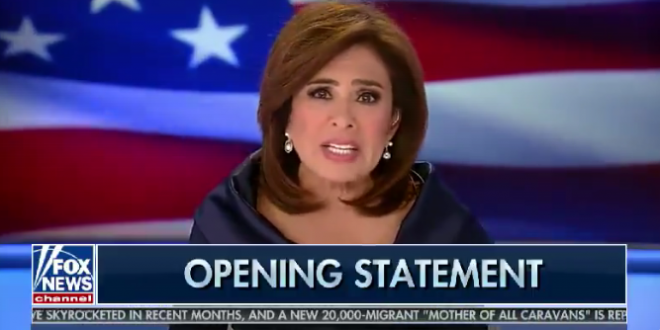 “Unless we make an example of the traitorous, treasonous group that accused Donald Trump of being an agent of the Russian government and as they spewed their hate I want to know who the unmasking, who did the leaking and if we don’t have a consequence of the highest level of government are not held responsible for this then it is a blueprint for a future effort to overthrow the government.

“Don’t be satisfied with the Mueller report. This is bound to happen again because these arrogant, condescending, leaking lying haters of you and me and the America that doesn’t have power will do it again unless we stop them in the only way to stop them is with justice, true justice and that is behind the bars justice. With this justice.” – Jeanine Pirro, last night.

Fox News host Jeanine Pirro returned to the air Saturday night without mentioning the reason for the two-week absence of her show, “Justice With Judge Jeanine.” However, her first guest for the evening, Rudy Giuliani, did allude to it. Sort of.

“I’m glad you’re back,” he said, shaking her hand. “We need, at this time that our country is in trouble, we need your common sense voice.”

Pirro was slated to appear Friday night on “The Sean Hannity Show,” but cancelled due to what Hannity called a “serious family emergency.” However, she didn’t mention the family emergency in her opening comments Saturday.

Don’t be satisfied with the Mueller report. This is bound to happen again b/c these arrogant, condescending, lying, leaking haters of you,me & the America that doesn’t have power, will do it again. And the only way to stop them is with justice. True justice- behind bars justice. pic.twitter.com/72aPr7ozmR

I don’t want to hear how Mueller exonerated Trump. Mueller didn’t exonerate anybody. Trump exonerated Trump because he didn’t do anything wrong! –@dbongino pic.twitter.com/Lr0JNJt9Z9

“The dems will continue to overreach , continue to press for impeachment, they are going to continue to remind the American people that their party has no ideas. And all this President does is deliver every time– promises made and promises kept.”- @CLewandowski_ pic.twitter.com/asIAK6lCVE