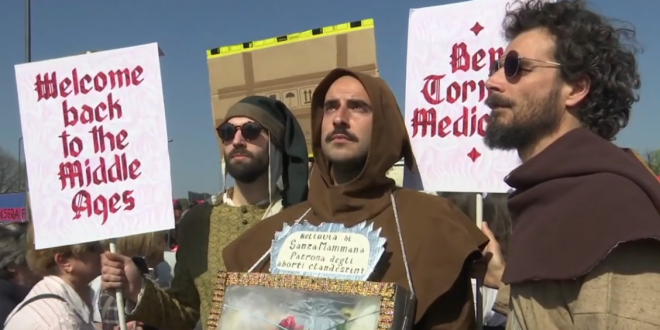 An estimated 20,000 people have protested in Verona against a conference which has brought a global network of anti-gay, anti-abortion and anti-feminist activists to the northern Italian city.

The hosting of the World Congress of Families (WCF), a US coalition that promotes the values of the Christian right, has been especially contentious in Italy as it is supported by the far-right League, a partner in the country’s coalition government. Matteo Salvini, the party’s leader and Italy’s deputy prime minister, spoke at the event on Saturday evening.

Other speakers have included Brian Brown, the WCF president, who fought against same-sex marriage in the US; Theresa Okafor, a Nigerian activist who likened gay people to the Boko Haram terrorist group; and Lucy Akello, a Ugandan politician who helped pass an anti-gay law that sets life imprisonment as the maximum penalty for homosexuality in Uganda.

A colourful procession of feminists and LGBT activists from several European countries marched through the city centre to state their opposition to the ultra-conservative policies of the movement.

Activists came from as far afield as Britain, Croatia, Germany, Poland and Switzerland to protest. Many sang “Bella Ciao”, an anthem of the Italian resistance during WWII, and banners carried slogans including “Our bodies and our desires, it’s we who decide”.

Local newspapers estimated the turn-out to be between 20,000 and 30,000 people. Organisers put the figure nearer 100,000. Founded in 1997 by the American Brian Brown, the World Congress of Families has held an annual meeting since 2012.

Today in Verona the World Congress of Families: a lineup of anti-LGBT, anti-feminist and anti-abortion activists whose self-declared goal is to restore the “natural family order”. We firmly oppose any kind of discrimination and forms of hate like this.
Love is love! pic.twitter.com/jOWdtYYuOu

Outside World Congress of Families Today in Verona, Matteo Salvini due to speak pic.twitter.com/9tH6l4QZor

ITALY: About 20,000 people protested in Verona against the World Congress of Families conference that attracted anti-#LGBTQ and anti-feminist activists from around the world https://t.co/JYJiFuXEhU #LGBT pic.twitter.com/EcIHcAIkfH

“The increasing ties between some of these US Christian conservative groups and the European far right will be on display this weekend at a summit of the World Congress of Families (WCF) in Verona, Italy.” pic.twitter.com/4P1BPHuOFL