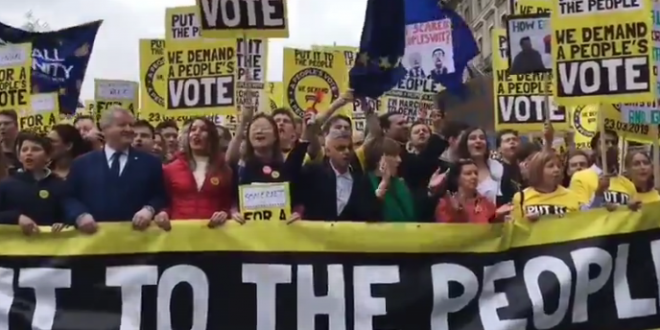 Hundreds of thousands of people opposed to Britain’s withdrawal from the European Union marched through central London on Saturday to demand a new referendum as the deepening Brexit crisis risked sinking Prime Minister Theresa May’s premiership.

Marchers set off in central London with banners proclaiming “the best deal is no Brexit” and “we demand a People’s Vote” in what organisers said could be the biggest anti-Brexit protest yet.

After three years of tortuous debate, it is still uncertain how, when or even if Brexit will happen as May tries to plot a way out of the gravest political crisis in at least a generation.

The mayor of London, Sadiq Khan, has said Theresa May’s “chaotic and confused approach” has led to failure and there is no other choice but to vote again on Brexit. Speaking at the march, he said the clock had run down.

“There is no time left for further negotiations. And the prime minister has wasted the good will of our European neighbours with her chaotic and confused approach. Those who wanted to help us secure a good deal for both sides now just want the process to end.”

The chances that the huge crowd snaking through the streets of London, carrying placards and the European Union flag, would persuade lawmakers to back a second referendum on Britain’s withdrawal, known as Brexit, are remote.

But that did not stop a petition calling to cancel Brexit from racking up more than 4.2 million on Parliament’s website on Saturday — the same day as the march.

The idea that the British could still be debating in late March a reversal of the coming split from the bloc once seemed far-fetched. The country had been scheduled to leave on March 29. But Parliament remains deadlocked. The left and right despise Prime Minister Theresa May’s plan.

An estimated one million people have taken part in the #PutItToThePeople march in London demanding a final say on Brexit#PeopleVoteMarch #PeoplesMarch https://t.co/pg6ziZGyO4 pic.twitter.com/NhOESLARND

Hundreds of thousands to join ‘Put It To The People’ march demanding a final say on Brexithttps://t.co/pg6ziZGyO4 pic.twitter.com/DOlQSX2t6J

Some of the media attack our judges as enemies of the people.

The Prime Minister attacks our MPs for standing up for ordinary people.

Well – we are the people – and when it comes to #Brexit we want a say over our future. #PeoplesVote 🇪🇺#PeoplesVoteMarch 🇪🇺 pic.twitter.com/6Lh93cdb3J