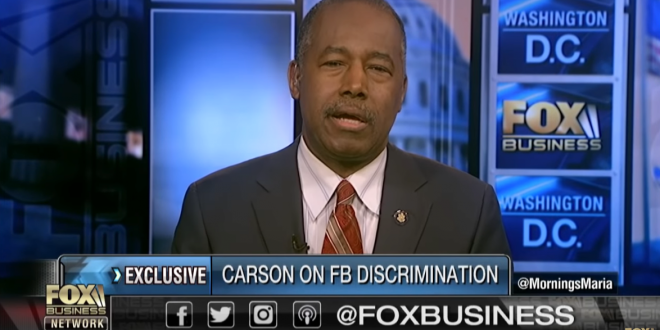 The U.S. Department of Housing and Urban Development said Thursday it is charging Facebook with housing discrimination, alleging its targeted advertising platform violates the Fair Housing Act by “encouraging, enabling, and causing” unlawful discrimination by restricting who can view housing ads.

The charges caught Facebook off guard, coming one week after the social media giant agreed in a sweeping settlement with civil rights groups to overhaul its micro-targeting ad system for job, housing and loan advertisements after discrimination complaints.

“We’re surprised by HUD’s decision, as we’ve been working with them to address their concerns and have taken significant steps to prevent ads discrimination,” said Joe Osborne, a Facebook spokesman.

“Facebook is discriminating against people based upon who they are and where they live,” HUD Secretary Ben Carson said in a statement. “Using a computer to limit a person’s housing choices can be just as discriminatory as slamming a door in someone’s face.”

ProPublica first raised concerns over housing discrimination on Facebook in 2016, when reporters found that the “ethnic affinities” tool could be used to exclude black or hispanic users from seeing specific ads.

If those ads were for housing or employment opportunities, the targeting could easily violate federal law. At the time, Facebook had no internal safeguards in place to prevent such targeting.