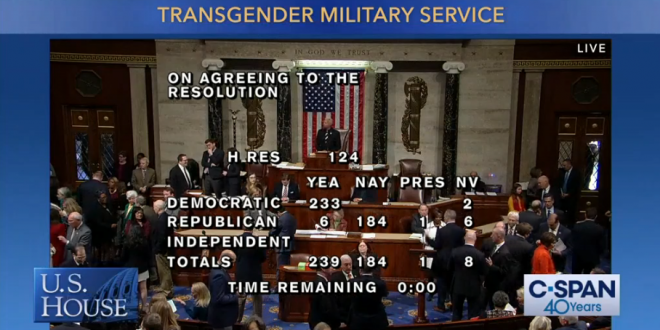 The resolution, which was introduced by Rep. Joseph Kennedy III (D-Mass.), was approved by a vote of 238-185 after an hour of debate on the House floor in which lawmakers denounced the Trump administration’s policy as discriminatory. Five Republicans voted in favor of the resolution and the Democratic caucus was united in supporting it.

On the House floor, Kennedy said his resolution reinforces the American idea that “equal has always been our nation’s North Star” despite a history that has included slavery and racial segregation.

“It’s a welcoming reassurance that the elected leaders in the U.S. House support the more than 13,000 brave transgender service members who proudly dedicate their lives to our nation” — @sarahkateellis https://t.co/8G8ZoCkLEi

Today, House Democrats took a stand against hate by rejecting President Trump’s arbitrary and discriminatory ban on transgender Americans serving in our military. Discrimination is not a national security strategy. In fact, the Department of Defense’s decision to implement this unnecessary policy weakens our military, ignores science, and flagrantly disregards the opinions of military leaders with decades of experience.

A man who has never served a day in the military, and who finagled his way out of service with a series of deferments for ‘bone spurs’, shouldn’t be deciding on a whim who can and cannot serve their country. Each and every day, transgender service members fight alongside their cisgender peers to defend the safety and security of our country.

Rather than attack their identity, we should celebrate their bravery, patriotism, and sacrifice. Thank you to Speaker Pelosi, Congressman Joe Kennedy, the Equality Caucus, and House Democrats for standing with the transgender community and leading with our values.”