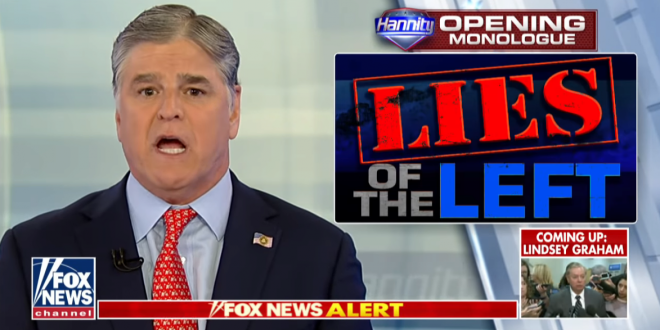 Sean Hannity: Rachel Maddow Has Been Lying To You

“You have been lied to by other networks and the news media on a spectacular level for years and years.” Sean Hannity last night told viewers he was “pissed off” after the completion of Robert Mueller‘s investigation and said there needs to be a “day of reckoning” for everyone from the “deep state” to the rest of the media.

Hannity first brought up not just his direct competitor Rachel Maddow, but her MSNBC audience as well. Hannity said they were sold “one conspiracy theory night after night after night” and that Maddow and her colleagues “should be embarrassed tonight.”

Previous Google To Fund Dozens Of New Local News Websites
Next Schiff: Evidence Of Collusion Is In “Plain Sight” [VIDEO]