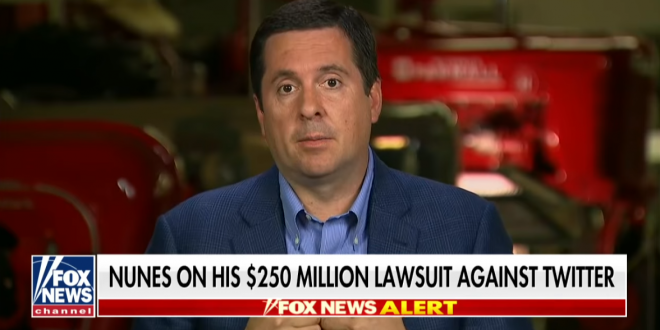 Stung by obscene and pointed criticism, Representative Devin Nunes, a Republican from California, has sued Twitter and three users for defamation, claiming the users smeared him and the platform allowed it to happen because of a political agenda.

The complaint, filed in Virginia on Monday, seeks $250 million in damages. In making his case, Mr. Nunes, a loyal ally of President Trump and the former chairman of the House Intelligence Committee, repeated several common Republican complaints that Twitter has repeatedly denied: that it censors Republicans, “shadow bans” their accounts and actively helps their opponents.

Though absorbing criticism comes with the territory for politicians, the complaint described the objectionable tweets from the three users as something “that no human being should ever have to bear and suffer in their whole life.”

The suit filed in Virginia accuses Twitter of “knowingly hosting and monetizing content that is clearly abusive, hateful and defamatory.” Section 230 of the Communication Decency Act provides internet services with immunity from liability for material posted by their users. Part of the lawsuit states Nunes won many elections for his seat by a comfortable margin, but only garnered 52 percent of the vote in 2018, which the lawsuit claims was uncharacteristic of Nunes.

The lawsuit used several paragraphs to lay out Twitter’s user guidelines, and then stated, “@LizMair, @DevinNunesMom, @DevinCow, @fireDevinNunes, and @DevinGrapes repeatedly tweeted and retweeted abusive and hateful content about Nunes that expressly and undoubtedly violated Twitter’s Terms and Rules.” It goes on to state “Twitter did nothing” to investigate its users, and that it ultimately affected the election’s outcome.

Nunes on Monday evening warned that his litigation “is the first of many lawsuits that are coming,” arguing that Americans’ “First Amendment rights are at stake” because of Twitter’s actions.

“They spread this fake news and the slanderous news,” Nunes told host Sean Hannity in an interview on Fox News, accusing Twitter of “proliferating out things that they agree with, with the algorithms” he said the company has developed.

“How is it possible that I can be attacked relentlessly, hundreds of times a day by fake accounts that they claim in their terms of service should not be there?” Nunes said.

This is a tweet Devin Nunes included in his complaint. pic.twitter.com/fjwuIaDQhK

*everybody laughs at Devin Nunes*

Henceforth there shall be no “Streisand Effect.” It shall be called the “Streisand variant of the #DevinNunes Effect.”

Republicans: Liberals are the biggest snowflakes ever

Devin Nunes: Hold my mom and my cow

Before Devin Nunes sued @DevinCow for insulting him, it had about 1,200 followers. Now it has more than 46,000 and is still growing rapidly https://t.co/HlIF7YACah